Our story was published on League Cultural Diplomacy (LCD) by Mr. Grant Hall, the original article is here.

Established by the architect Le Hau, Haus Space opened in Ho Chi Minh City (Vietnam) in 2016. Le Hau’s recent work includes The Fox Cafe in Phan Thiet and the Pho Da Cafe in La Gi, with the latter being recently featured in international architectural publications. League Cultural Diplomacy (LCD) came to Hau’s attention through our Vietnam based ‘Phan Thiet Buildings’ heritage conservation project, and subsequently Haus Space became an LCD client in May 2017. Today, we are profiling some of the recent work produced by Haus Space and Le Hau. 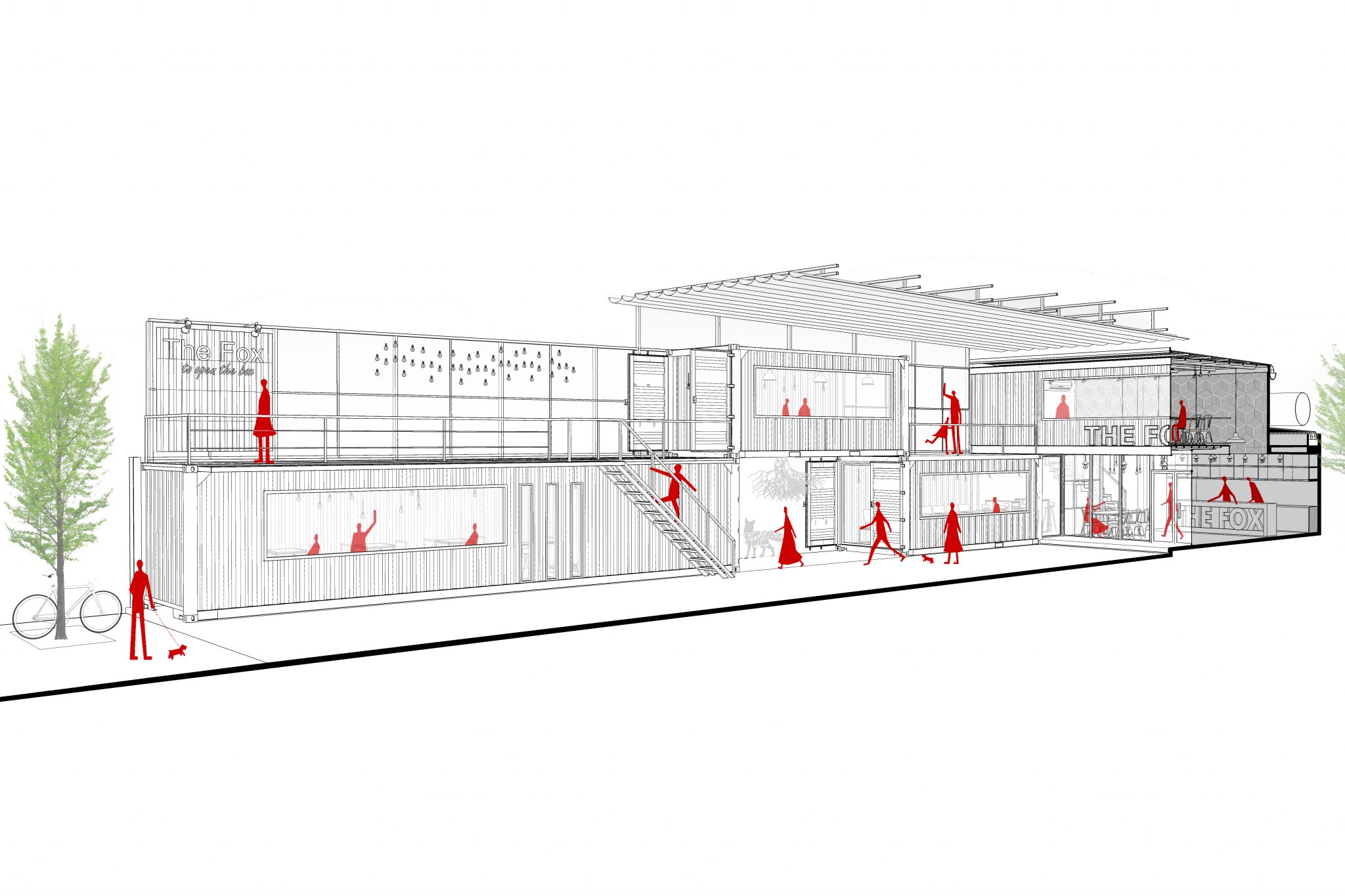 The Fox Coffee Shop in Phan Thiet, Vietnam, was the first creation of Haus Space to become a reality. This cafe was hugely popular when it opened in 2016, and it’s design, which featured reused shipping containers and a good deal of exposed steel construction, was the most highly contemporary building design seen in Phan Thiet for many years, which generated a considerable amount of attention for the cafe and Haus Space. 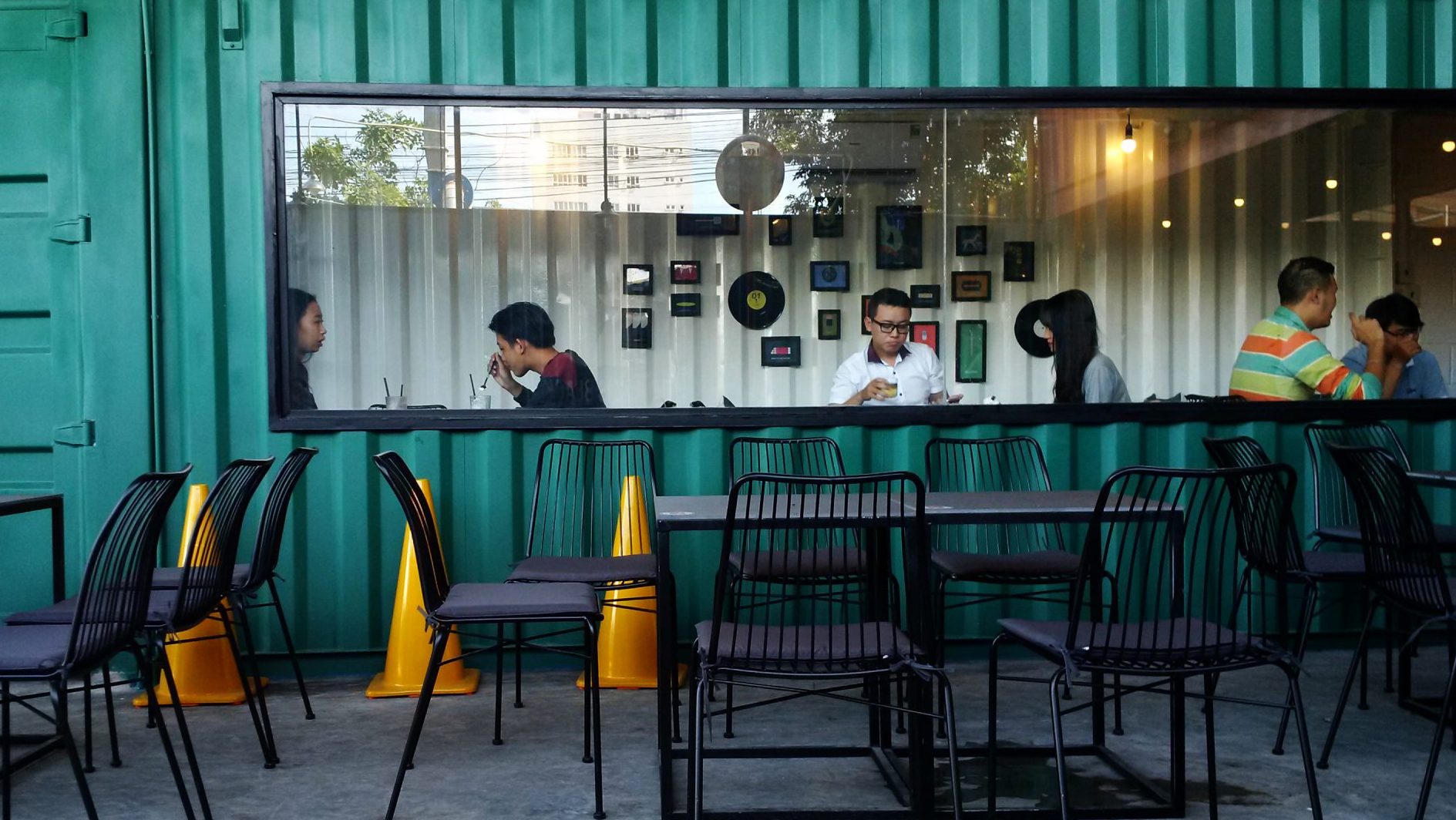 Fox Coffee took about three months of development. The owners of the project were running a clothing business where teenagers were the primary customers and they wanted a cafe design appealing to this group. The construction site, which is located in a new urban area, had been rented only for a limited time, so they required the constructions to be portable, and convenient in operation, and so Haus Space proposed to use shipping containers. The main concept was to retain the typical characteristics of containers, such as the structure, the form, and the curves on the container body, as much as possible. They had two 20-foot containers, and one 40-foot container. One was placed above the others to form a post-and-lintel structure. The containers were cut to make windows, and the offcuts were reconnected to build a third container, which was placed perpendicular to the others to form an “L” shape. In that manner, an open and closed space was created providing a sense of harmony, a balance between the solid and the void, and a highly interactive space. Through the windows, people were able to enjoy activities such as photography (think selfies), small music performances, group gatherings, and small events in a common yard open to the sky. To increase the area and comfort, the tops of the containers were covered with an additional layer which served as a second floor as well as a heat barrier. Covering most of the site to decrease the intense sunlight during the day, a retractable roof system also gave people a spectacular sky view at night. 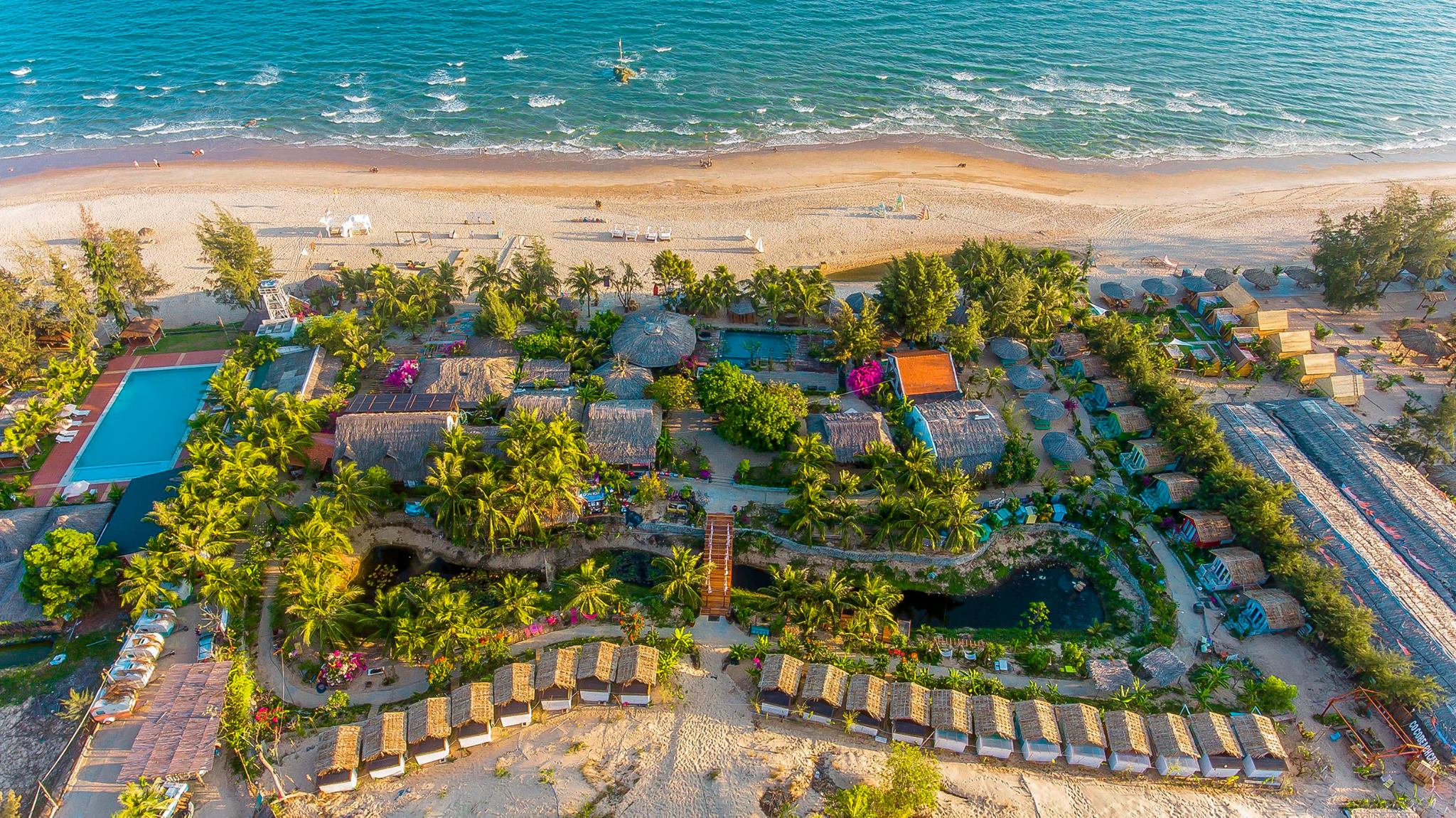 With the ‘Fox’ design getting so much positive attention, Haus Space began receiving many queries about their services, and the Coco Beach Camp in La Gi, Vietnam, became the second Haus Space project. In this project, Haus Space designed a series of comfortable beach huts, plus a masterplan for new developments at the resort, which included both building construction and landscaping. 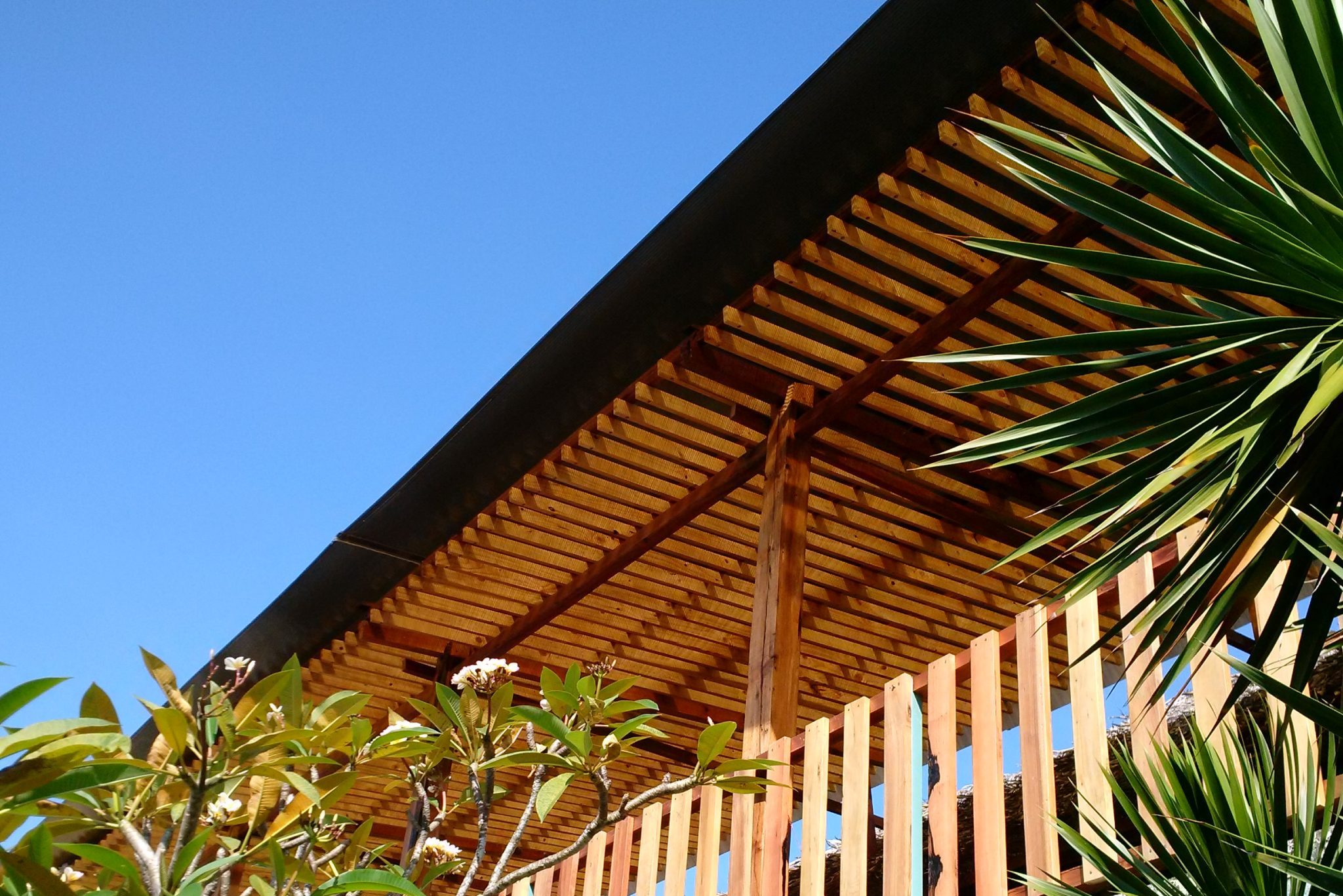 The design and construction of the Coco Beach Camp provides a good contrast to that required with the Fox; whereas the Fox was primarily of steel construction, the new Coco Beach Camp constructions were made of wood. Furthermore, Hau spent three months working with local craftsman on-site, where he ensured local construction materials and the unique woodworking techniques of the region were built into the constructions. The opportunity to work with local craftsmen provided Hau with a unique experience from which he has learned a great deal, a type of learning, Hau says, ‘you can’t learn at architecture school’. 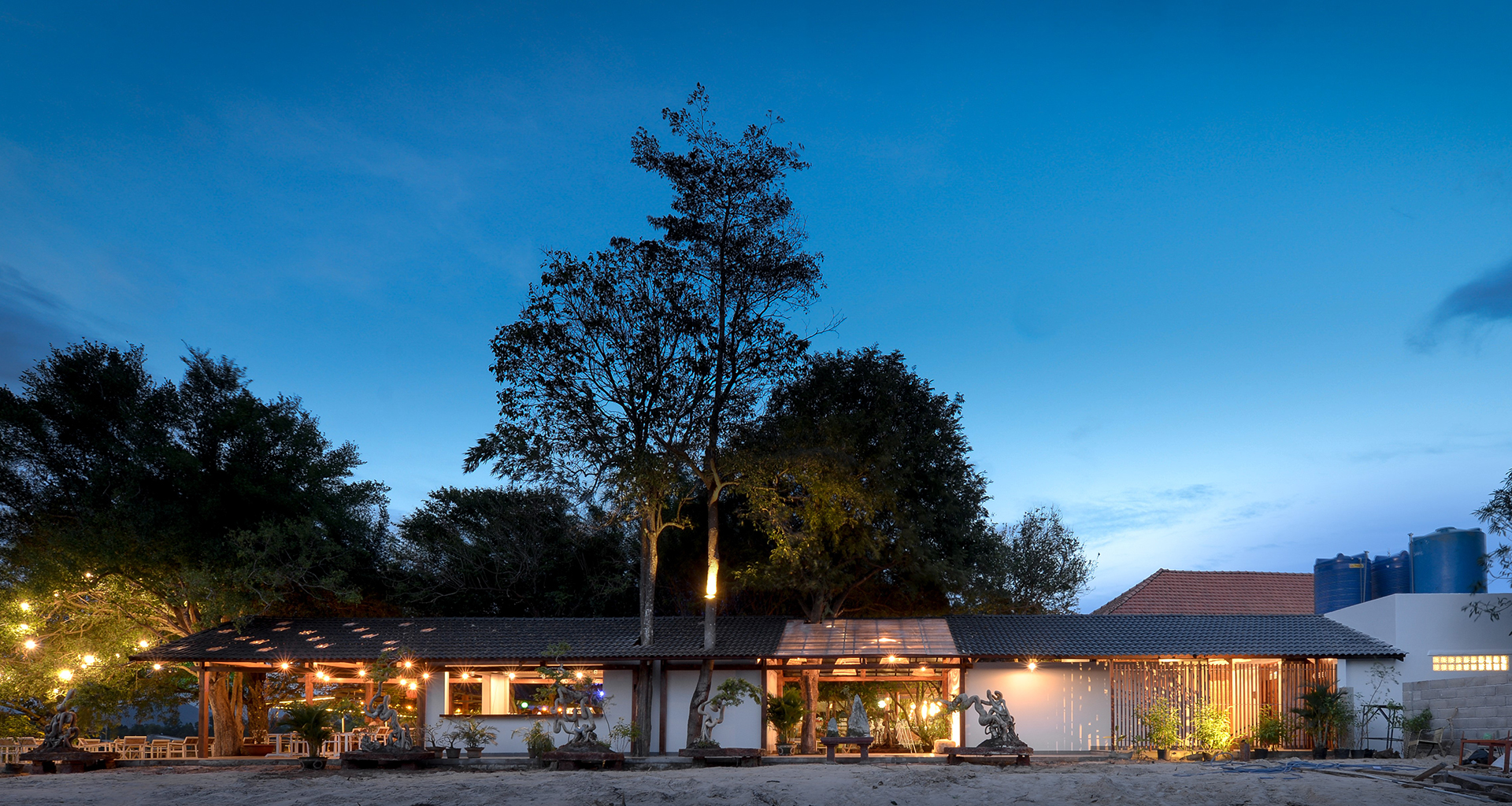 Just as word got out about the Fox, the design for the Coco Beach Camp brought Haus Space more attention, which led Haus Space to it’s next job, designing the Pho Da Cafe in La Gi. When reading this profile, a continuous story becomes evident through the first three Haus Space projects; Fox is based in steel, Coco Beach Camp in wood, and now the Pho Da Cafe is presented, which features a combination of both steel and wood. 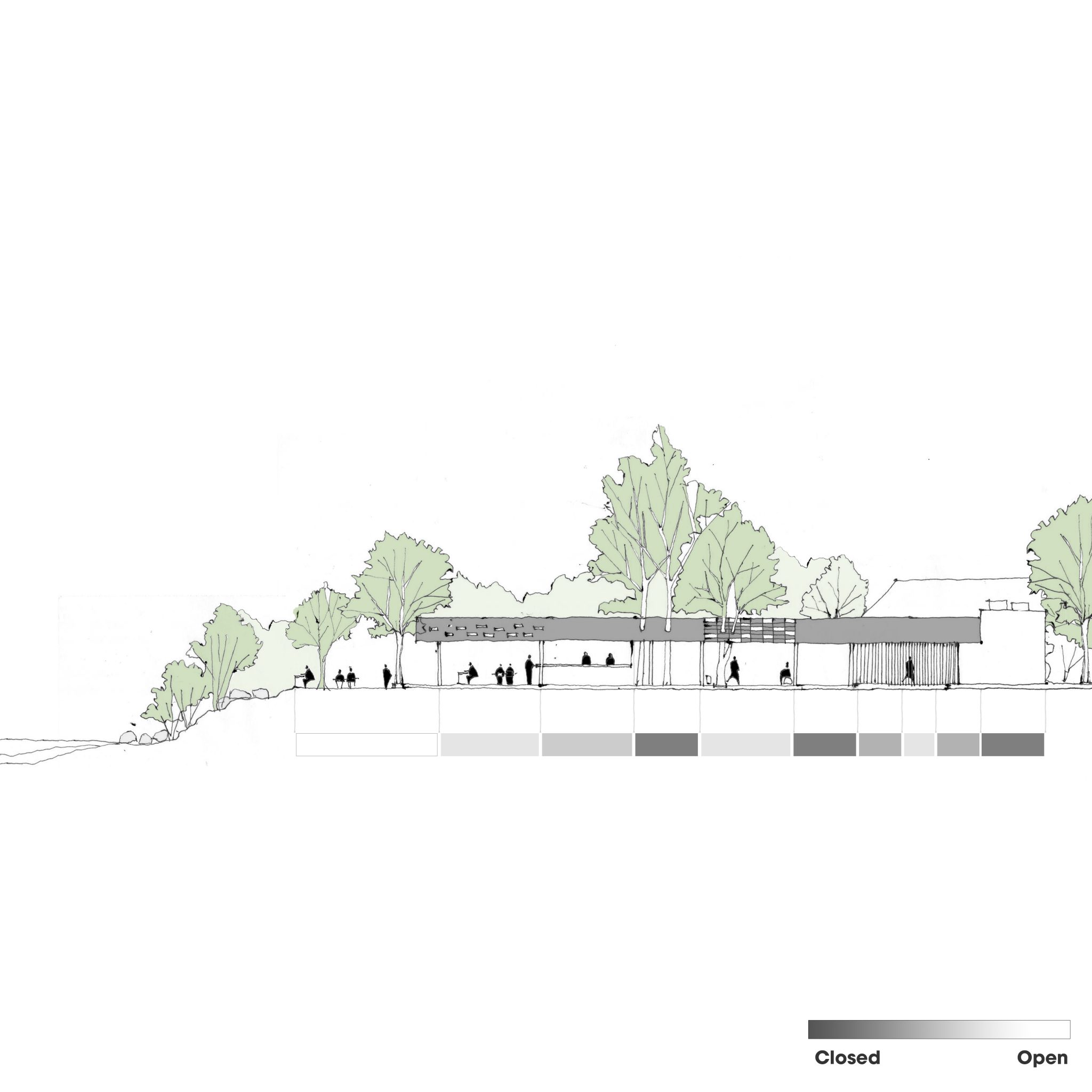 To date, Hau considers Pho Da his finest project as it best expresses his philosophies about architecture, which largely revolve around sustainability, sympathy for the environment and yin yang concepts, where for instance, the traditional is blended with the modern, both in terms of the materials and design characteristics that have been incorporated. In April 2017, the building was featured in ArchDaily (the worlds most visited architecture website), and in January 2018, it was nominated for the 2018 Building of the Year.

The project represented the initial phase of renovation for an existing local restaurant. The owner had a limited budget, so Hau expected a slow renovation process with multiple stages to completion and expected gaps in between with the cafe remaining operational around construction. This demand required slow, natural transitions that developed as the business grew. As regulars to the cafe might observe, the first phase was harmoniously blended with the cafe’s natural surroundings and existing bricks and cement construction. The new space feels modern and yet inviting to cafe visitors.

At Pho Da Cafe, Hau has created a functional, open space for a cafe that is also intimate with nature. He chose to make the roof light and inexpensive by using a modest steel structure. The main support system replicates the familiar wood frame observable at the current restaurant, keeping harmonious rhythms between the new and the old, and the open and the enclosed spaces. Inspired by the colors and forms of the nearby dam, and riverbed rocks, Hau kept the roof, floor, and walls neutral and allowed the wood elements to be featured intermittently through the space. It provides the guests with the usual comforts, whilst encouraging them to enjoy an intimate connection with nature. 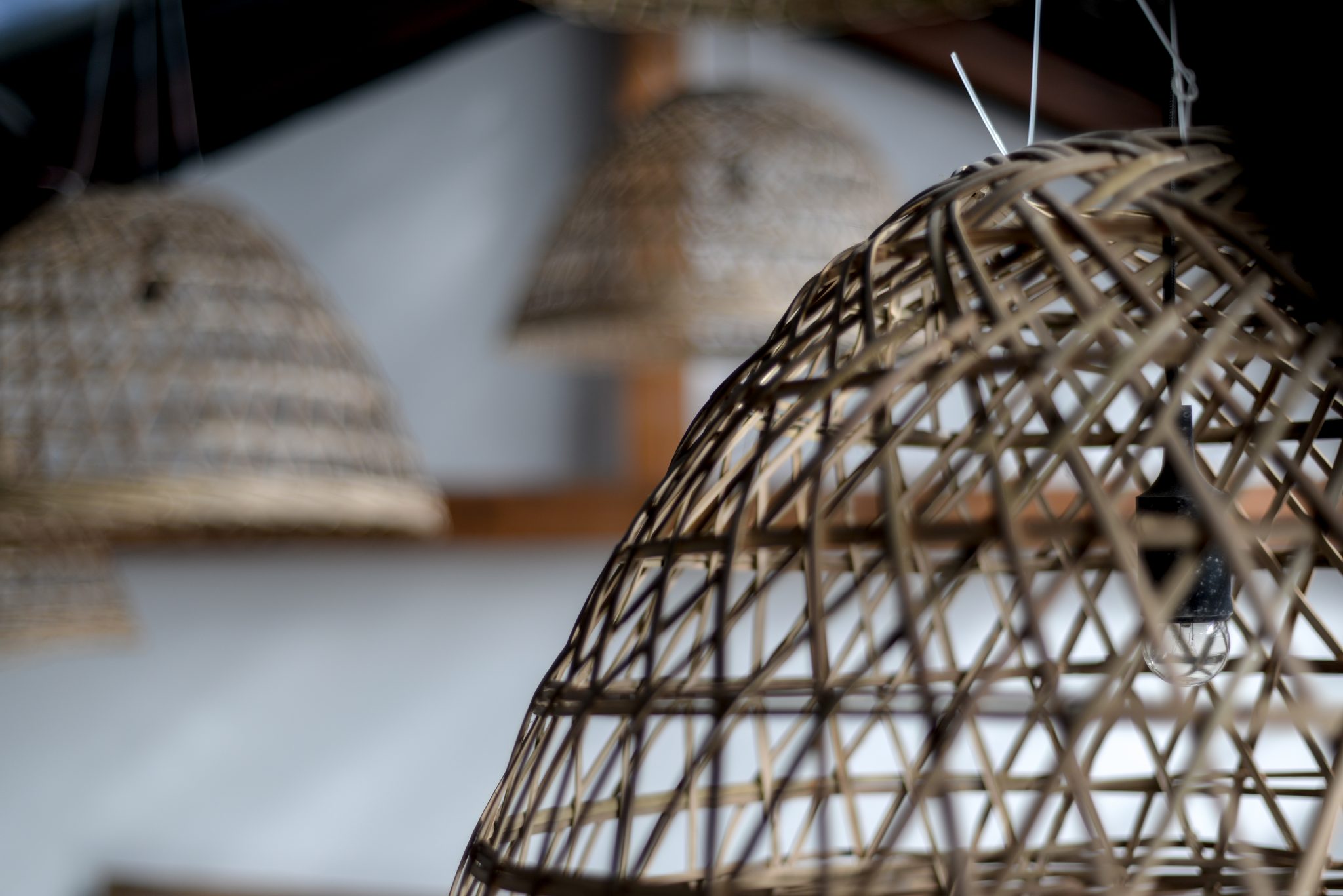 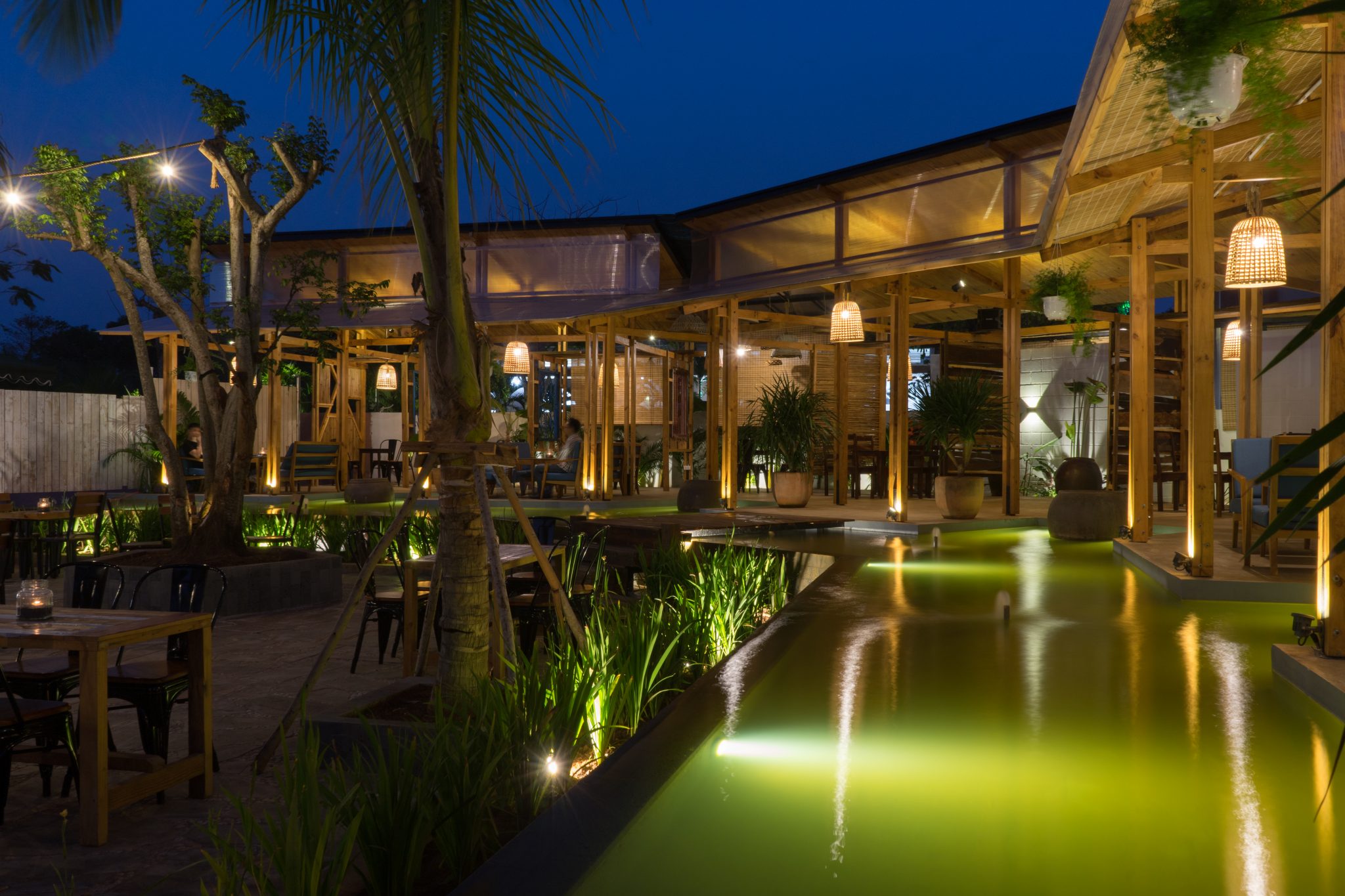 Cui ca phe is the third hospitality design commissioned to Haus Space. In this project, Haus Space aims to provide users with a fresh and relaxing state of mind by creating a semi-open space, integrating rustic wooden structure with greenery and water features. Seats are separated into groups by small pools and soft screens in order to bring privacy to users, whilst still giving all of them access to the shared courtyard where various activities and events take place. 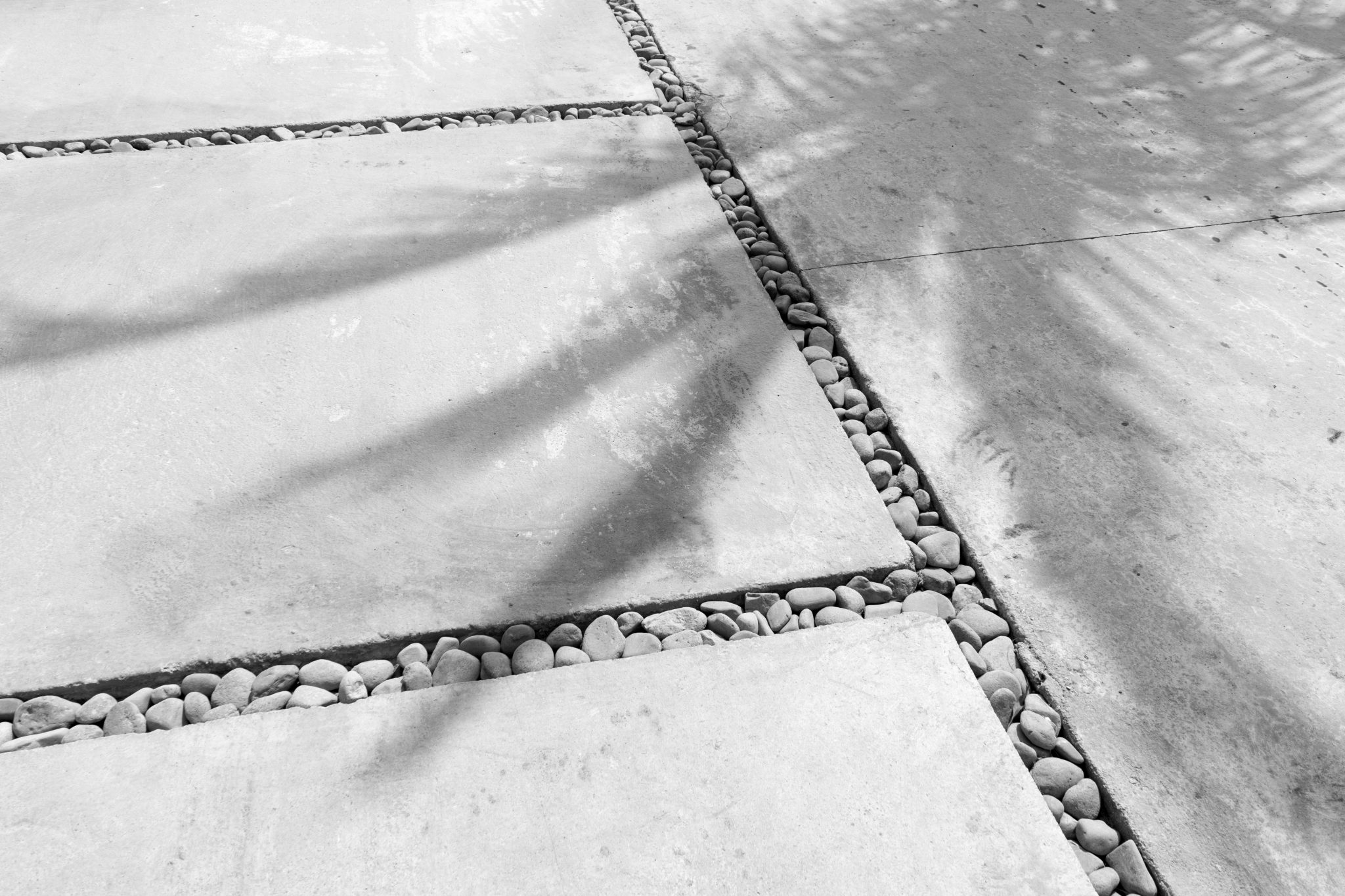 Since completing its first three projects detailed above, Haus Space has had a steady stream of work and inquiries about possible future commissions. Below are some of the projects currently underway. 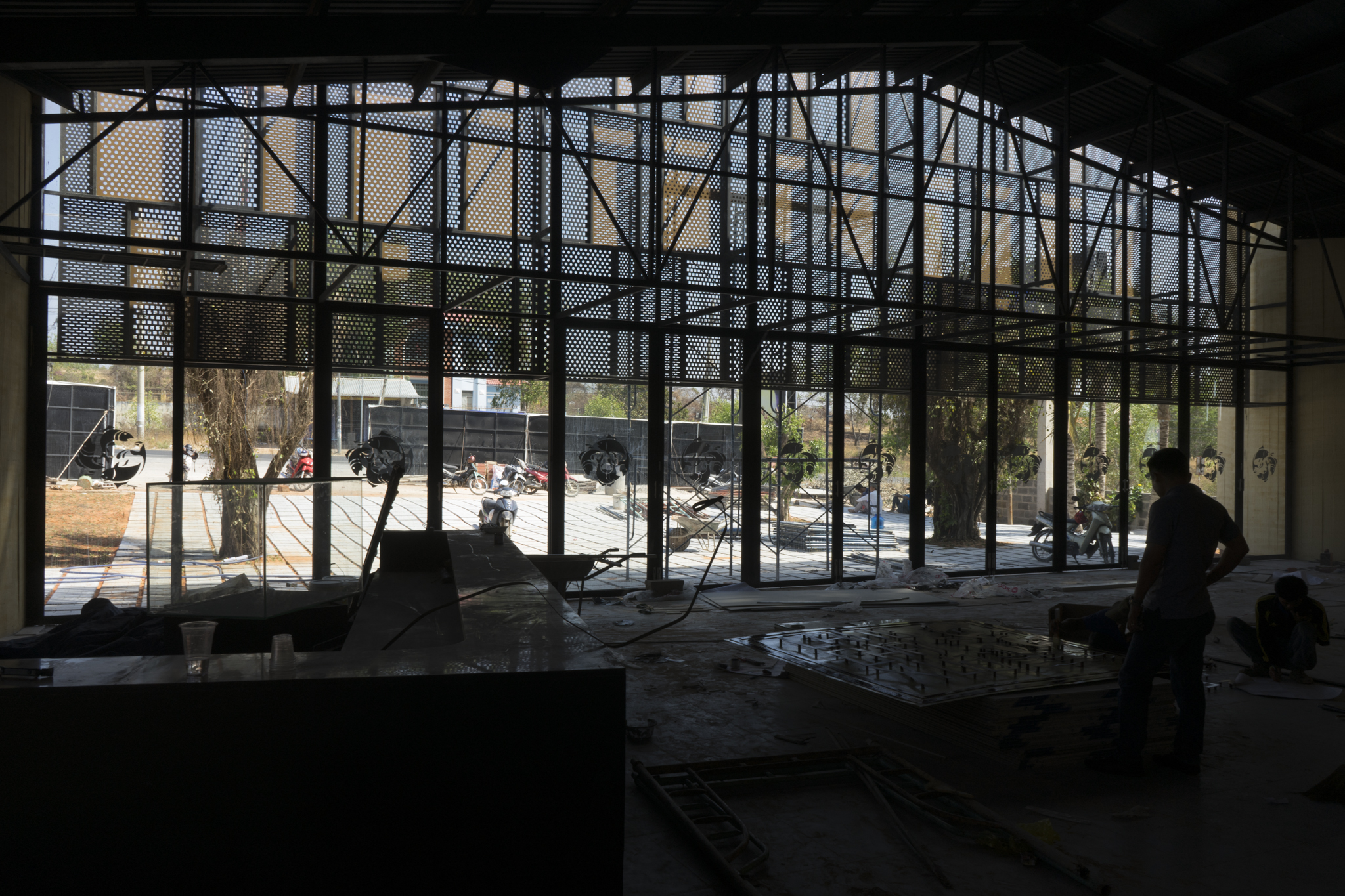 The Old Fishing Village Gallery in Phan Thiet, Vietnam, is a large construction which is part of a tourism/entertainment facility which currently presents song and dance performances celebrating the fishing culture of seaside Binh Thuan Province in Vietnam. The new gallery, which has been designed by Haus Space, will allow the facility to incorporate visual arts displays about the local fishing culture. As he is from Phan Thiet, Hau is very happy to contribute to the sharing of his local culture to the broader world, which has allowed him to put a lot of passion into the project. Click here for more information. 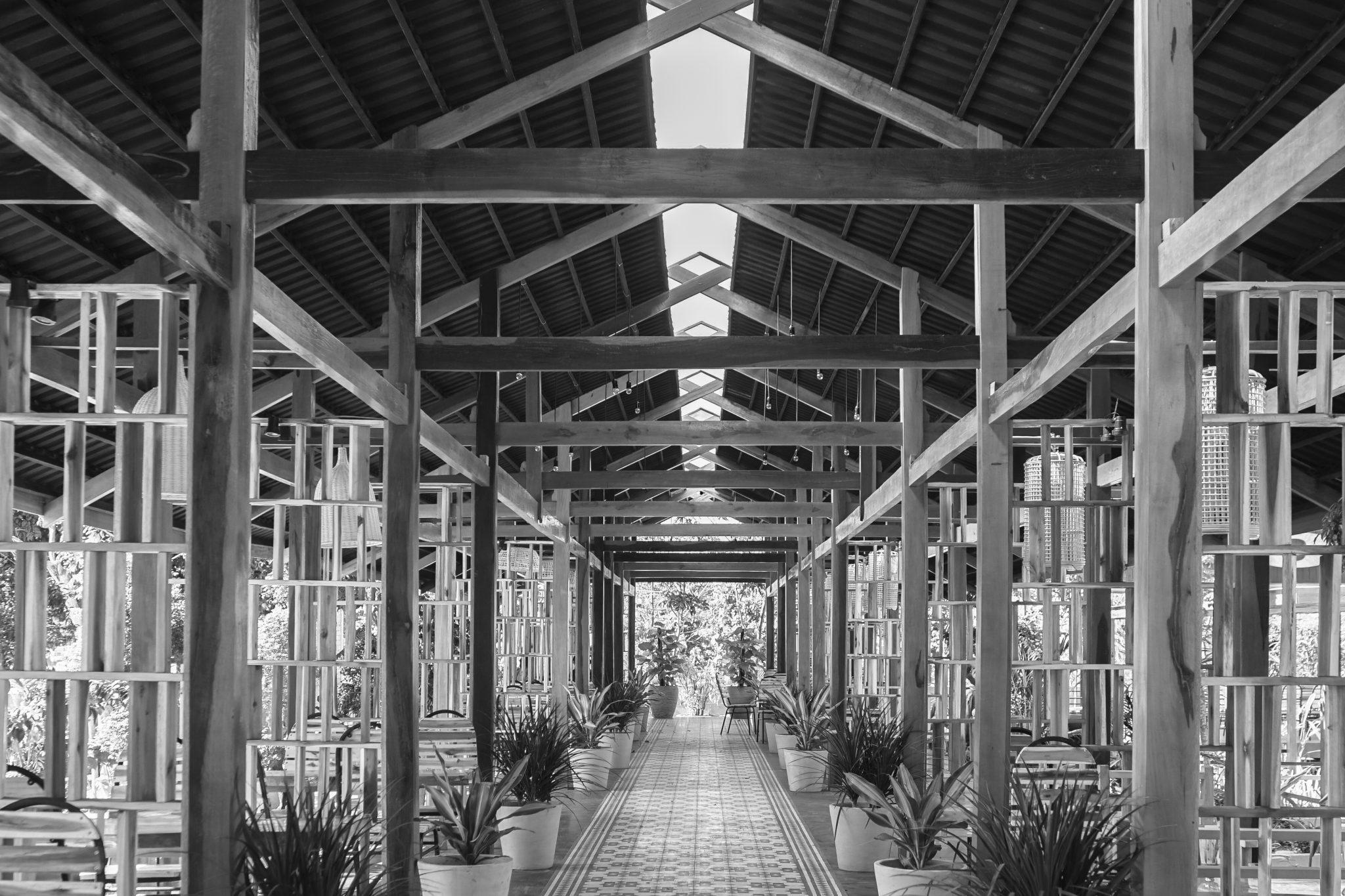 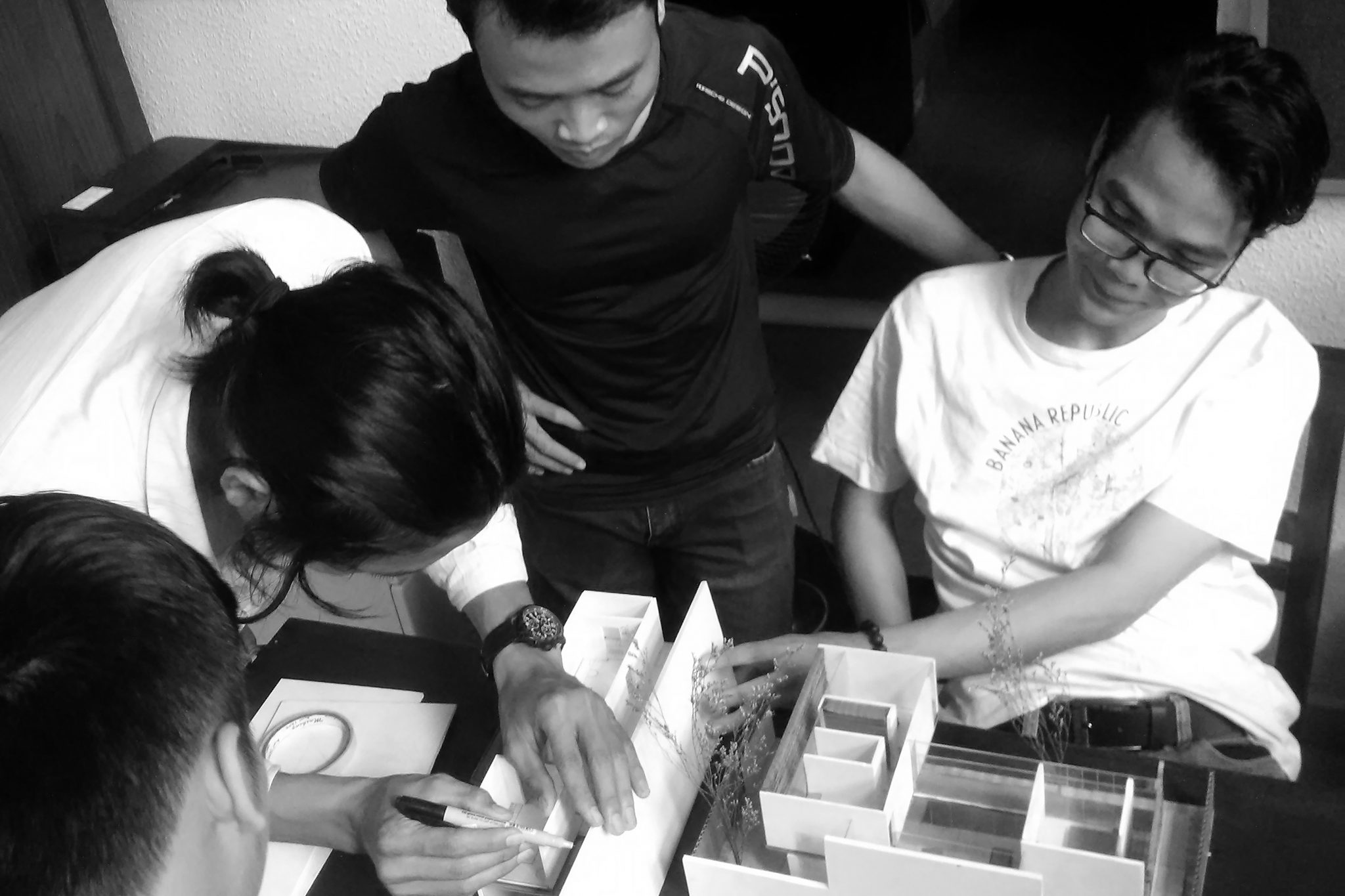 Haus Space operates from an studio at 11 Lê Ngô Cát, Phường 7, Quận 3, in Ho Chi Minh City, Vietnam. The studio has hosted a range of architecture and design related events, including workshops and talks. Follow Haus Space on Facebook or explore their website to learn more. The photo above shows the design team at work making a model for a possible future project at the Haus Space studio.

Our story was published on League Cultural Diplomacy (LCD), the original article is here. League Cultural Diplomacy (LCD) is an international event management, consulting and training agency specialising in cultural engagement and cultural diplomacy. They help their clients build outstanding international and cross-cultural relationships through cultural engagement initiatives and events. It is a pleasure for Haus Space to be an LCD client.